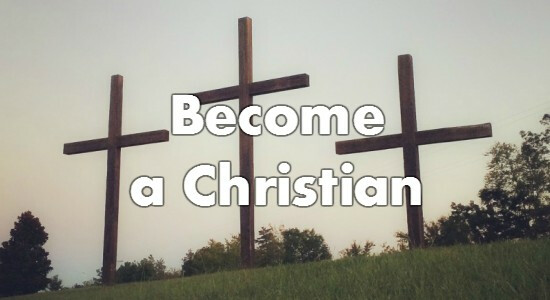 Next Steps - Become a Christian

The Most Important Thing

The most important decision you will ever make is to become a Christian. Unfortunately, even living in the Bible Belt, many are confused about how someone actually becomes a Christian.

It has nothing to do with what religion your parents are, or how nice you are, or how hard you try to be a good person or keep the 10 commandments. Instead, it's all about how you respond to who Jesus is and what He did.

God Is the Creator

Genesis 1 tells us that God created everything, including Adam and Eve, the first human beings. God said that they were "very good." He placed them in a garden, provided them with everything they needed. Because God made the world, He gets to make the rules. But he only gave them only one command; not to eat from the tree in the middle of the garden. Adam and Eve were living in fellowship and communion with God. Everything was as it was supposed to be...

Until one day Adam and Eve believed the lie of Satan, disbelieved God's promises, and disobeyed God by eating from the forbidden tree. By rebelling against God, their Creator, they fell into sin and took the whole world with them. Sin, death, sickness, disease, war, and violence entered the world. They were banished from the garden, and they were spiritually separated from God. They were no longer very good. They were sinful through and through.

They soon found out that their children were just like them; sinful. And their grandchildren were, too. In fact, the whole human race would have the same sin problem. The Bible says, "All have sinned and fallen short of the glory of God."  It goes on to say, "The wages of sin is death."

This is our predicament. God's standard is perfection. We have rebelled against Him, breaking His commands. And the just punishment we deserve is death and Hell. But we cannot fix ourselves.

This is why Jesus is good news. God the Father sent Jesus the Son to earth. Jesus came to earth as a human being to do live the sinless life that we were supposed to live. He was tempted in every way as we are, but he never sinned. He fully obeyed God the Father. He was crucified on the cross taking the punishment we deserved.

1 Peter 2;24 says, "He Himself bore our sins in His body on the cross, so that we might die to sin and live to righteousness; for by His wounds you were healed."

He was buried and three days later he rose again, displaying victory over sin and death. This is the good news! Christ came to earth, lived sinlessly, died sacrifically, and rose again!

Because Jesus made atonement for sin on the cross, he gives an invitation to all sinners to turn from their sins and trust in Him. By repenting, or turning away from sin, you acknowledge our own sinfulness and submit to the Lordship of Jesus. By trusting only in Christ and His word on the cross to save us from sins, you throw off any hint of self-righteousness. You cannot be saved by trying harder, by being more obedient, or simply by feeling sorry about what you've done. You are saved from sin when you turn from it and place your faith in Christ alone.

Below is a video that explains the gospel:

Questions? Contact a pastor. We'd love to talk more about this with you.